There are articles on the process of digesting rejection, that badge of participation in the walk we walk.
Speaking for myself, I can only say that few of them affect me. The form rejections say nothing, (other than “not for us”) and the others are often too cryptic or contradictory of one another to be of help. The only personal rejections that still sting are those that follow an enthusiastic full manuscript request or a Revise & Resubmit request, (R&R) and giving feedback indicating a fatal flaw that resonates.

{I do, however, choose to take acceptances very personally. Thank you, you know who you are!}

But the point is that even the greatest greats have gotten rejections, and in hindsight, the specific reasons given suggest the flaw may lie with the rejecter, not the rejected. This article has been around for some years for a reason. It’s a compilation of just such.

Only here’s a new one for you, fellow veterans of the rejection battles. After seventy-three years, on February 7th 2019, the British Council issued an apology to the no-longer-able-to-receive-it George Orwell, regarding a rejection of a commissioned article.
I post the original rejection letter below. Keep in mind that, at the time, Mr. Orwell was already regarded as one of England’s greatest living men of letter. 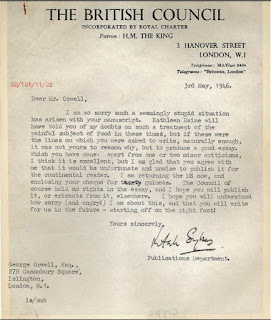 Mr. Orwell didn’t live to get the apology. Not that we are owed a thing, but let’s not hold our breaths for any.
Instead---
Do your best work. Make it better.
Keep trucking.

"Do your best work. Make it better. Keep trucking." Yes, M'am. It's great to read these old letters.

Like you, I think the worst ones are when the full is requested, they keep it for a really long time, then say not for us. And it's always good to remind ourselves that we are in good company, like getting bad reviews too. Some of the best books & best writers have awful reviews.