“I think in terms of the day’s resolutions, not the years’.”
Henry Moore

Because it took me a few years to realize how unhelpful New Year’s resolutions were for me, I thought I’d express my gratitude to any and all who happen to read this post by sharing Henry Moore’s hard-earned wisdom.

It’s so tempting, though, to make a resolution to mark the end of something, and the beginning of something else. Because others have said it better, I will sign with yet another quotation. It will have to be my only New Year’s resolution, so as to not betray the first quotation.

“Come, gentlemen, I hope we shall drink down all unkindness.”
William Shakespeare 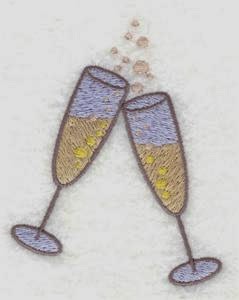 Yesterday morning, the youngest of our adopted kittens decided to sneak out and explore the great big world out there. Only four-months old and almost, but not quite, done with the vaccinations he’d need to be an outdoor feline fellow, his first outdoor adventure was scheduled for the beginning of March.

Little Sokolov had other ideas. A half-day later, with the sun going down and the temperature dropping, I notified the microchip company that he was officially lost. I notified the neighbors, and the original shelter he came from. I cried inside, stroked his brother and older sister who looked for him everywhere. DD and I walked the neighborhood, and I made a poster ready to be put up the nearby streets the next morning. 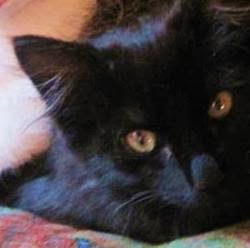 As I was falling asleep, well past midnight, I thought about how I’d have to let go of this little guy. I thought about the work that kept me busy that day, revising (again, yup) my latest MG novel, and how I was not ready to let go of either and send them to the cold reality out there. I thought about DD, getting ready for auditions that will set her out into that same world of cold shoulders, indifference, and possible bruising encounters. I thought about DS, and how hard it was the first few weeks after he moved into his own place, only two miles away.

That’s a lot of letting go, and letting go- I must learn to do. 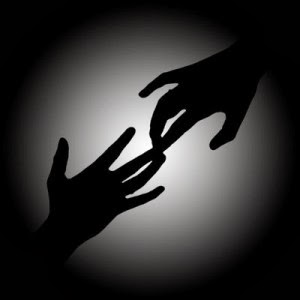 As the two kitties left behind snuggled up on top of me, they refused to give up the prime space on my chest and squeezed themselves against each other in a way I had never seen them do before. I made the conscious effort to breath as deeply as I could, (a real feat when you have fourteen pounds of cat on your chest) and said, repeatedly, “Thank you for the time we had together. Now go out and do wonderful things.”

I realized I was talking to little Sokolov, to DD, and to my novel, all at once.

I fell asleep as calm as a cucumber, if I could ever figure out this bizarre expression.

At three forty three in the morning, Sokolov marched in and plopped himself on top of the kitty-pile. Maybe he was not ready to let go. Maybe I am not, either. But if our time here is a journey worth having, I think I've seen a hint of a mile-post down the road.

And after posting here, I’m bouncing my fingers straight to the microchip company’s site to give the good news. He’s ba-a-a-ack!
Posted by Mirka Breen at 1:30 AM 17 comments:

The Night Before Christmas

I didn't grow up in Christmas Country, or, as my grandmother put it, with Christmas-People. But I have no issue whatsoever with being wished a Merry Christmas, because if you want to include me in your holiday and wish me well, my heart is gladdened.

“Christmas, children, is not a date. It is a state of mind.”
Mary Ellen Chase

My wish to all is that on this Christmas Eve, and all the eves to follow, your children are tucked in a warm bed, and all feel safe and loved. 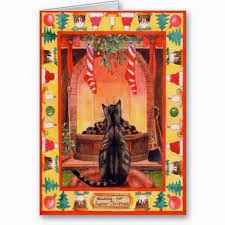 Confession: I’m not one for astrology or star alignment studies. If these interest you, I mean no offense, nor do I know much about it. I just don’t get the attraction to explore and classify in this way.

But the phases of the moon are a different matter. The Jewish calendar is a modified lunar calendar, and our holidays revolves around it. The full moon and the new moon tell of what part of the month we’re in. The part of the month tells of the next holiday. Most Jewish holidays fall on a full moon. 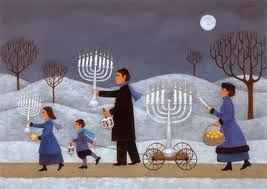 Realizing it’s tonight, brought back the last full moon at our home, about a month ago, and the howling and powerful gusty night we had.

We lost power a bit after nine PM. In the pitch dark, it dawned on me that the only ones home, beside myself, were two new kittens and one older cat we had just adopted. DD was babysitting a few houses down, and DH had gone to a local board meeting. The challenge for me was not only to find candles, but to find places to put them where the cats would not knock them down. I managed three such places.

I called DD to see if she was alright with the two three-year-olds in her charge. They were more than fine. The little girls each own an IPad, and they were streaming a children’s movie. The little ones, just like my kittens, were anything but sleepy. Not the darkness, but the powerful gusts kept everyone enervated, for good (the kids) and for bad (me and the older of our cats, who mewed and ran all over the place for hours.)

When the grandparents returned, DH returned also because the meeting was canceled. He went with a flashlight to walk DD back. She promptly went to sleep, while her mother (me) couldn't sleep all night. Not only was the house rattling, but things were slamming against it, two widows popped open from the pressure, and our car alarm (as well as other alarms) kept going off because of things slamming against it.

But it was my husband who reminded me that we didn't need the candles after all. He opened all the curtains, and the light of the full moon came flooding in.

By the time the windstorm was over, there were a few deaths and a lot of debris all over town. Just one house-length up our street a tall pine tree was down, blocking most of the Avenue. As our utilities are underground, this had nothing to do with the outage we had. But driving around it was impossible. I had to walk to the other side of the street to retrieve our garbage containers.

It’s nothing when compared to the disaster in the Philippines, but it was as strong a wind as I’d want to experience for a long time. I have been in one hurricane in New York, (turned out not to be much) and one in Florida, (they know how to handle those there) but this was the most whoosh-wow wind-storm I recall, even counting these. 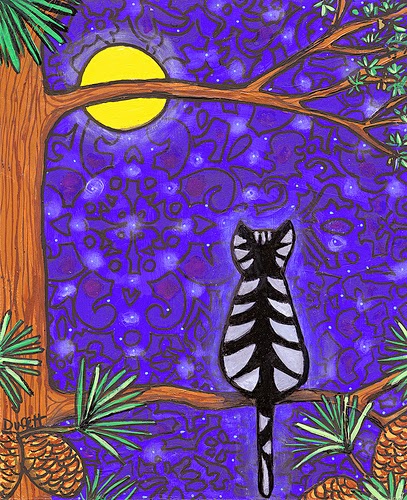 © Shelagh Duffet
Posted by Mirka Breen at 6:00 AM 9 comments:

You Can’t Chew With Someone Else’s Teeth

Writers and actors always attempt this impossibility- chewing with someone else’s teeth. We know it as speaking for another character. But there was a poignant reason this Yiddish saying came to my mind yesterday afternoon. 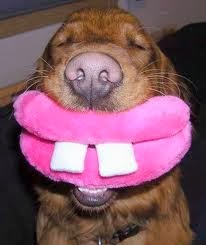 I was running an errand and passed the large beggar-lady who is perennially parked, in her wheel chair, on the corner of College and Ashby Avenue.  I had dropped coins in her cup in the past, though I usually just walk on by. I pass that corner a lot, and I can become oblivious to the fixtures that are always there. Life’s busy-busy-busy, y’know?

The Beggar-lady is always carefully covered with a thick blanket, and while I can’t see her disability, she is clearly down on her luck. She isn't starving, because her abundant body testifies shortage of food is not  the most immediate problem. But her distorted features, her one permanently sewn-shut eye, suggest struggles few will know outside of fiction.

‘Tis the season, and more passers-by were dropping coins and bills in her cup. But I could hear she was trying to make them slow down, and was asking for something. No one stopped long enough to listen. Busy-Busy. The beggar-lady didn't help her cause by starting every approach with an “Excuse me Sir, Ma’am, can I trouble you for something?” and no one seemed to stay long enough to hear what that something was.

Not sure why I slowed down then. Maybe because our Hanukkah has passed, and the others’ Christmas is a couple of weeks away and, well, maybe I just didn't feel that busy. But when the beggar-lady put this to me, I stopped before plopping a quarter her way.

“Can I trouble you for some milk and stale bread?” she said. “I’ll pay you, it’s just that they won’t let me in the store.” She offered me a few dollars, but I waved them off.

I told her I would go to the grocery-store half a block away and be right back. The whole way there, I wondered why she asked for stale bread. I bought a pint of milk and the best fresh bread they had, and came right back. The beggar lady blessed me, and when she smiled I saw she was missing a few teeth.

I began walking away, pondering all the while what a person with missing teeth would have done with stale hard bread. It even occurred to me that the use of the word “stale” was kind of odd. Not “day-old,” or plain “old.” She said “stale.” Funny.

Then I looked back. From underneath her blanket, the beggar lady pulled out a miniature dog. She carefully tore the very fresh bread I had just bought, dipped a piece in the milk, and offered it to her dog. 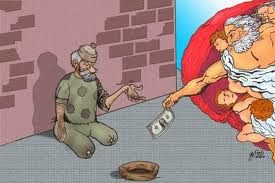 You really, truly, can’t chew with someone else’s teeth. That’s what I've been thinking about.
Posted by Mirka Breen at 6:00 AM 10 comments:

To me every hour of the light and dark is a miracle,
Every cubic inch of space is a miracle.
~Walt Whitman, Leaves of Grass

This is what occurred to me the other day, when I thought about the oil that lasted eight times longer than the mavens said it would.

Our very being is miraculous. If the holiday lights remind us of the beauty of life, the miracle of existing, and having the awareness to marvel at it all- the celebration is on. 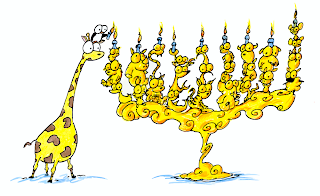 Happy Hanukkah, one and all!