Will this be the year we abandon the ‘family picture?’
So Christmas passed, and soon Hanukkah will too. For the first time in thirteen years, the Breens have not taken a family photo to send out and to keep as a record of our kids growing taller and their parents growing older.
Something in the equation of {December = this ‘n that} has been lost on us this year, and I have no explanation. We are still here, and we are still very much a family. DH still takes artful photograph, and my kids, in their mother’s opinion, are as fully worthy of being photographed.

Three years ago my mother passed away the day after Thanksgiving. We intended to take the photograph a week earlier, and I was going to bring the one we chose to show her. Something came up, and we postponed it by a week. My mother loved those photos, and the thought kept ringing in my ears: you should have taken it when you intended, so she would have seen one last Breen Team picture.
It took all the muster I didn’t know I had to get it done only a week later. I thought of it as a sort of act of defiance: Here Mom, better late than never. But we did it, and this one’s for you.
Note we are all wearing black except for my daughter who wore her grandma’s favorite color instead. 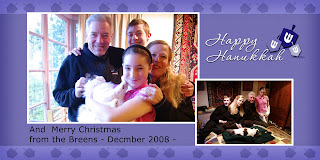 The next year my father died, also right after Thanksgiving. He was the one who scanned the printed card for me, so I could send some electronically.
All I could think, while smiling at the unmanned camera, was that he would have raised an eyebrow at the backdrop of an aircraft carrier behind us, seemingly abandoned on a rainy day, and his family looking oddly happy.
It was bitter sweet, thinking of the first time in ions that he would not have scanning duty, and would not see the card.

But we did take the picture, and we did send the card. 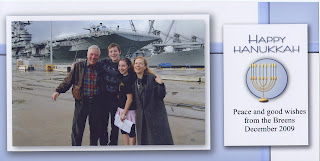 We barley managed last year, but we did not let December pass without. 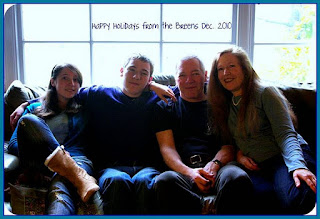 Not this year.
What‘s our excuse? Could it be that I just can’t envision anymore who the audience for our photo is?
Posted by Mirka Breen at 10:46 AM 10 comments:

We are Hanukkah People, and if I learned one thing, it’s that this charming but minor festival should not, in any way, ever, no-way-no-how, compete with Christmas.


I understood this well when I was growing up in Israel. My parents were not religious, and I often felt out-of-the-loop during major holidays. No special prayers at our home, no synagogue to go to and greet others all donning festive clothes, no respectful abstinences from the hustle-bustle of ordinary days, such as is done by religious Jews. A part of me accepted my parents’ definition of not being defined by ancestral tradition, and a part of me yearned for those traditions.


But during Hanukkah we were part of the crowd. It is more a historic commemoration, not so much a religious holiday, and my parents’ anti-religious sentiments did not interfere with my wish to be part of my people. My mother fried latkes and my friends came over to pass the cold evenings spinning a four sided top in a game of chance. We got eight days of vacation from school, and older neighbors shoved coins called Hanukkah Gelt into our pockets, to do with the money as we wished. Hanukkah was light, and fun, and I never felt like an outsider looking in, as I did during the high holidays or Passover.


This continued after I came to live in the United States. The signs and sounds of Christmas I saw all around were beautiful, exotic, (to me) - and had nothing to do with Hanukkah. I could not relate to the rumors that some of my people had something they called a Hanukkah Bush or that they gave presents to their relatives’ kids every night for eight nights, to outdo the ‘other’ holiday. What folly.


This lasted until I became a mother, and found myself worrying that my kids were deprived of Christmas, no doubt an echo of my own childhood sense of being an outsider at the holidays. During my kids’ early years something strange happened to my Hanukkahs: first, decorations with glitter and glitz began to mysteriously take over our living room. Then came the presents, eight for each night, and the coins too, for Hanukkah Gelt was transformed to Hanukkah guilt. Our intimate evenings with a few friends, frying latkes and singing songs, became super parties with hot-mulled wine thrown in, and too many people to have a chance to say ‘hello’ to.


And then I had an epiphany: my kids didn’t get Christmas, and I was depriving them of Hanukkah.


The last few years have been warm and quiet. The smell of frying latkes is still there, and we light a Hanukkah menorah every night for eight nights. We go for a walk on Christmas Eve looking at the beautiful light displays of our neighbors. But our own house is decidedly not glitzy. The competition has been called off. 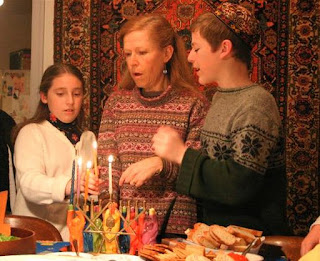 Happy Hanukkah to my people, first candle tonight. And Merry Christmas to all who rejoice on that beautiful holiday, only a few days away.
Posted by Mirka Breen at 8:56 AM 16 comments: 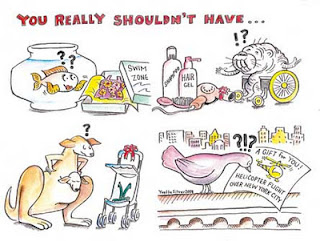 No matter how curmudgeonly you might imagine you are, one way or another everyone finds themselves partaking in the grand gifting exchange that overtakes the country in December.


I knew I was firmly in the second group when I chose a gift for a relative who adored guns.   Now I admit they are sometimes (if rarely) necessary. But call me prissy- I find no charm whatsoever in guns. This relative adored them, collected them, displayed them, and collected books about them. (I should add that he never used any, and passed away peacefully in his bed a few years ago.) When I saw a beautifully produced coffee- table book on antique rifles, I bought it to give to him. I thought he’d like it, (he did) all the while knowing that it was not something I would want. This is, to date, my most extreme ‘I-honor-you-by-giving-you-what-you’d-like-even-if-I don’t.’ I continue to give in this way.


My mother was the other sort of giver. She adored bargains, and would pick up the oddest things she deemed others should have. She had become immune to the brow-raising her offerings caused. She did not need an occasion. If anything, she avoided December and birthdays, and would unload her finds at unexpected times. But I see that her gifts were, in the end, more hits than misses. We stared, puzzled, at the brush to clean dirty nails, the salt-shaker with giant holes, or the plastic straw-holder. She thought we could use them, and you guessed it, we do to this day. In many ways my mother’s choices were more enduringly successful.


Of course, like everyone else, I’d like to give you what we both like and what I also think you should have. But sometimes all the elements don’t come together. That is when you know which kind of gift-giver is the primary one in you.

When I was a little girl reading movie magazines about beautiful people, I read about some who flew their lunch from Paris to Hollywood or even, gulp, flew to have lunch in Paris. Us mere mortals would plan months in advance, belaboring every detail, knowing it would be years before we could think of embarking on another trip.


How glamorous to hop over and hop right back.


Last weekend I got to be one of the beautiful hoppers. DD had two auditions in New York City, and the two of us hopped across the continent, stayed at a nice midtown hotel, walked about town a bit after her auditions, and hopped right back. Such zip-zapping may be part of any business person’s life these days, but it was never part of mine.


Passing some of the addresses I know so well from queries and submissions, I saw glorious marble-hall buildings, dapper doormen, and gold-embossed publishing houses names. I was happy that these well-known publishers got to inhabit palace-like quarters. Good for them.


Or is it? It occurred to me that the same houses have cut staff, closed their doors to unagented submissions, and have taken fewer risks when choosing new titles for their lists. They seem to take the bottom line seriously. But having their headquarters right in the middle of the most expensive real estate on the planet, were they cutting the right corners?


I’m not a publisher. But I did once work at a high-end business, where the right address mattered greatly. However, publishing houses are wholesalers, not retailers. Does a Fifth Avenue address really make for a better business?


I’m only asking questions, not giving answers. I wish someone who really knows would chime in. I wish ‘The Big Six’ would not layoff editors and first-readers, so they could keep their door open, if only a crack, to the unknown writers offering something different. I wonder if saving on rent wouldn’t make business sense.


Back to reality, I’m folding laundry again, and dreaming up my next story. Once typed-up, it may make its way in a white envelope across the country and into the middle of a fine pile in one of these Upper East Side Avenues. There it will sit a while, marveling at the beauty of the plush carpeting, before being turned around in my SASE, or being shredded.


At least our stories get to glimpse the glitz and glamour. I’m still thinking about how much of this is real, and of what value. In some ways I’m as baffled as I was when I read the movie magazines all these years ago. 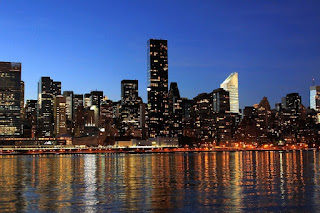