Galileo and the Scientific Truth

On this date, February 26, in the year of our Lord 1616, Galileo Galilei was formerly banned by the Roman Catholic Church from teaching or defending the view that the earth orbits the sun.

Now, I am not anti-Catholic (emphatically not) or anti-religious. The church had its reasons, with worry that challenging this dogma would lead to questioning all dogmas, an unstoppable process. Indeed, history showed this fear to be justified, and the loss of dogmatic faith that had already begun then, continues to this day. The church had reasons to fear that the baby will be thrown out with the bathwater, an expression so vivid I’m using it despite it being a cliché.

The thing is, four centuries later and a formal reversal of this ban by the church itself, we still ban thinking that we fear will lead to abuses of the social fabric and result in hurtful conduct. Only now, it is happening in the name of freethinking.

We haven’t changed. We’re still terrified of our own species propensity to abuse one another, and in the name of protecting us from ourselves we fire/take-down/ban/shun uncomfortable ideas.

I know real tolerance and considered debate when I see it. We’re not there yet.

Saluting the brave Galileos out there. You give humanity some hope.

In one of the funniest episodes of the TV series Seinfeld, Elaine wants to impress a famous Russian novelist with her inside knowledge. “Did you know that War and Peace was not Tolstoy’s original title? The original was War—WHAT IS IT GOOD FOR?”

She was half-right. The working title was The Year 1805.

Titles are an art all its own. If you ever marveled at a beautifully wrapped gift only to find that the content was less impressive, you got a glimpse as to what great titles can do. They are an enticing invitation to look inside without revealing the content. Fiction titles are evocative, not informative. 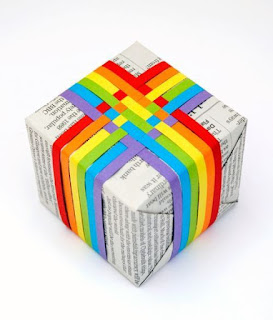 Titles cannot be copyrighted. They are often the brainchild of the publisher, not the author. Most publishing contracts don’t even give the author the right to veto a title they don’t care for.


For myself, I consider all my titles to be working-titles only. The title serves as a lamppost to remind me where or what or even why I’m telling this story, and sometimes whose story it is. But once the last line of the first draft materializes, all bets are off. I got to the finish line in one piece, and renaming the journey is wide open.

Most folks have routines that get them going no matter what sort of work they do.
Most writers I know, or know of, do their creative work in the morning. If writing is in addition to their day job, this means very early morning.

No matter when or what, routines help. It’s unglamorous. Admitting that you don’t write drunk into the wee hours of the night with existential despair as page after page is scrapped because you won’t give up until you have something--- doesn't sound arty.
(Oh-so very unlike Dashiell Hammett, at least as depicted in Lillian Hellman’s Pentimento.)

Most writers have a set routine and write no matter where inspiration chooses to dwell any given day. Most workers go to work no matter how enthusiastic they feel at a particular moment. Same thing. 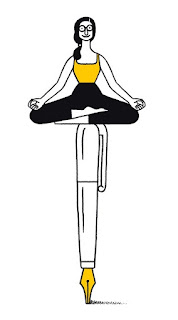 © Luci Gutierrez for the New Yorker

My morning routine is as uninspiring as it is grounding. With small necessary adjustments, it generally goes something like this:

*Woken up by Nougat, one of my three cats. She thinks she’s an alarm clock.
*Thanking her, and thanking G-d for returning my soul to me. It’s a Jewish prayer that sets the day right.
*Making my bed. The other cats come in to help, with great merriment for all.
*Cleaning litter boxes, changing water bowls, filling the food bowls. Felines have priority because of all their help.
*Making strong tea with foamy milk. Drinking it, doing my best to keep cats off the foam.
*A short meditation. It’s supposed to be quiet time, but the cats determine this as well.
*Turn on the computer. Open WORD.
*I’m ON IT.

Two hours or so later, DH gets up and the rest of the day commences. That means coffee, breakfast, and the busy-busy stuff.

Do you have routines to get going?

Living in the San Francisco bay area, the celebrations of the lunar calendar are evident. 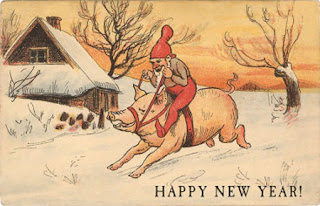 The year of the PIG.

If you are celebrating, many blessing on you. If you’re not, why not? 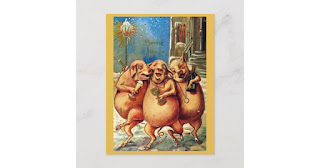 !Wishing peace and prosperity to all!