Not complaining, mind you. I live in the land of eternal Spring. But it’s also the place where Mark Twain famously said, “the coldest winter I ever spent was Summer in San Francisco.”

So while we are not sweating away, nor sipping lemonade on the porch, some things are decidedly summery.

And I continue the rhythm of not writing first drafts until the school year resumes.

I no longer have kids at home climbing on my knees as I try to concentrate. Well, DD is home, but she treats me more like a suite-mate than a padded chair. I don’t have the excuse of years past that I will wait until they are back in school during the day and I can count on uninterrupted time.

However, I discovered that re-charging the creative batteries is serious business. For years, I wrote original stories from September to late May, and only revised or polished in summer. I found this rhythm worked for me.  I’ve kept it.

The Gershwin song Summertime casts its spell, magical and wistful as ever.

Summertime,
And the livin' is easy
Fish are jumpin'
And the cotton is high
Your daddy's rich
And your mamma's good lookin'
So hush little baby
Don't you cry
One of these mornings
You're going to rise up singing
Then you'll spread your wings
And you'll take to the sky
But till that morning
There's a'nothing can harm you
With daddy and mamma standing by… 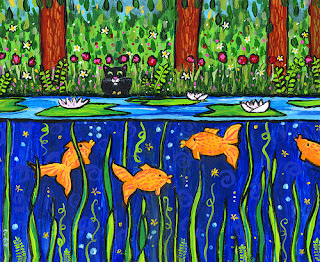 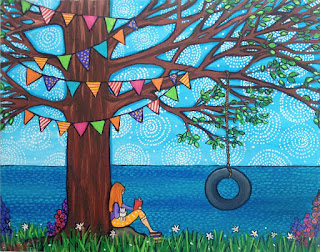 © Summer Reader by SHELAGH DUFFETT
One of my critique buddies  responded with, “I want to be where this gal^ is.”
I thought how I am exactly where this reader is.
I mean, almost.

I do have cats, and one of them will jump on my lap, though never when outdoors. She’s too dignified for that, I think.
I do have a view of the bay if I walk a few blocks up the hill.
I have good books to read. Maybe I would read more if the to-be-read pile by my bedside was not so dauntingly tall.
And when I’m sitting by the blooming plants, it’s not to read, but to weed. I told you it’s an almost.
I do have a tree in the backyard I lean against. I do so when I’m tired of yard work.

All of that got me thinking about the old story of the rich man’s omelette.

A poor man returned home and told his wife he’d had the most amazing meal at a rich man’s house. The wife, eager to replicate it, asked what it was.
“We’ll need some eggs,” the man began.
“We’ve got that!”
“And some butter,” said the man.
“Well, we don’t have butter. But I can use margarine.”
“And some French cheese, such as Boursin or Pont-l'Évêque, ” the man added.
"We don't have anything like that, " the wife said.
"What do we have? " the husband asked.

“We’ll use Velveeta,” the wife said.
“And we'll need fresh shallots,” the man continued.
“Onion power will do fine,” the wife says.
As they sat to eat, they had to agree that it was, well, almost.

This made me resolve to at least now and then try and narrow the gap between the summer reader above, and my life.

Be nice to yourselves, out there.

This Day in History

Many things happened on this day in recorded history, some good and many bad. But I choose to focus on something great that happened this date a century and a half ago. I’m only sorry I’m a year late to commemorate the one hundred and fiftieth anniversary.
1866 US House of Representatives passes 14th Amendment. (Civil rights)
It is this amendment that finally fulfilled America’s declarations of independence, which stated all men were created equal and endowed by the creator to life, liberty, and the pursuit of happiness. (It would take a few more years before this would come to stand for all men and women.) It is the fourteenth amendment that made former slaves into full citizens.
Here is what section one of this amendment is says:
“All persons born or naturalized in the United States, and subject to the jurisdiction thereof, are citizens of the United States and of the State wherein they reside. No State shall make or enforce any law which shall abridge the privileges or immunities of citizens of the United States; nor shall any State deprive any person of life, liberty, or property, without due process of law; nor deny to any person within its jurisdiction the equal protection of the laws.”
Aspects of this important constitutional clarification are debated even to this day. But most Americans hold it as part of the fabric that is our nation, one that is based on an idea, not on a nationality or racial ancestry or a specific religion.

There’s what to celebrate. 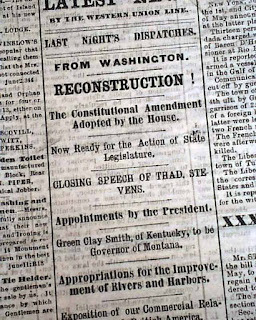 About STRIFE and STRIVING

There is a spiritual notion that the reason for suffering in this world is so we may experience moments of happiness. After all, if we were blissful at all times, how would we even know it?
Most modern picture books are based on a similar notion. There has to be a problem. It is better if the stakes are high, and the problem is a BIG problem. There must be an attempt to solve the problem. The formula recommends three attempts increasing in intensity before the resolution. Striving and struggling leads to a happy or satisfying ending.
Reading stories works as a catharsis. The reader and listeners undergo a whole cycle of worldly strife in a few minutes. It also serves pedagogically as a map for struggle and triumph over what all of us go through and will continue to go through as long as we live.
But recently I found myself reading some picture books that were of a different stripe. They were written years ago, and it’s easier to locate them in a library where deaccession isn’t frequent, or in collectors’ bookstores.
DS gave me just such a gem he found in a specialized bookstore. A PENNY AND A PERIWINKLE by Josephine Haskell Aldridge was published in 1961. The main character has no conflict, and, in fact, pushes senseless stimulation away. It is meditation about being content with a simple and purposeful life. 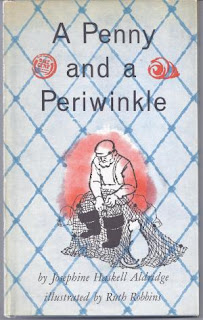 It was a gift for my birthday, and I’ve read and re-read it almost every day since. I think young kids would love it.

I wish there were many more like it on the market.