A Gift to Self

It wasn't until my 30th birthday that I had this epiphany: If there is something I wish someone would give me for my birthday, that someone should be me.

I remember how mind-blowingly freeing this was. No, I don’t want a party. I wish I could spend the morning in a museum by myself.
I took the day off work, and I took myself to the museum. Anything and everything after that was happily received and gratefully accepted. I had already had the birthday celebration I wanted.

Well, thirty was ions ago. But I have kept this gift to self every year since. Sure, I could do this every day, but really- I wouldn't.  Life and my obligations get in the way. However, every birthday Mirka gets something she really wants from herself.

Last year I got the happiest shoes. 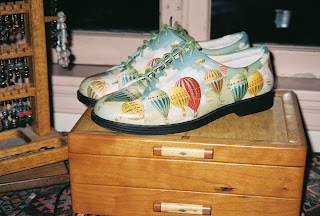 I still float away every time I put them on.

And this year I made myself the yummiest cake- 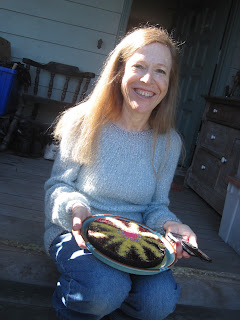 ^^^Chocolate Raspberry torte^^^. The cell phone in my hand was because I had to tell everyone about it.
And here I am doing it again.

Sorry you can’t try the cake. But try my gift to self on your next BD. You might be as happy, or at the very least you’d have gotten something you wanted.

Another blogger’s lamentation of being stuck at home, because she slipped by the washing machine and tore a muscle, brought back a visceral memory.
Wowee-ouchee.
Two years ago I fell tripping on the edge of a rug on the way to answer the door. The resulting sprained wrist and blue lip and black eye brought some pitying looks from people who would  never look at DH the same. The poor guy was nowhere near, but yea, right, they all say that. I could see it in their eyes- next thing you’re gonna tell me you ran into a door, lady?

But what struck me (aside from the hard floor) was how mundane it was and how much it took away from me (not to mention my spouse’s good rep.) for the next couple of months.
And I also never got to see who was ringing the doorbell. Probably a solicitation for whatever, dagnabit.

Maybe I can remind myself that these are also the stuff magic dust is made of. DS saw a wounded pigeon limping today. Near her were other pigeons, chirping away and doing their best to keep humans away from their crippled comrade. DS’s eyes were moist when he told me of this.

This is a contemplation of the little things.
This is a little post.

To paraphrase: all the world’s a competition and all of us are running.

Back from the piano competition, DD did not win. But in a real way she did. She had a marvelous time, made good friends, and did very good work.
And best of all- we felt wholeheartedly that the winner was *the right one*. This, oddly, makes all the difference.

I feel the same about all the writerly competitions I seem to have inadvertently gotten myself into. I don’t see them in the making as DD does hers, but we are always in competition- for a slot on a publisher’s list, an award, or even a reader’s time.
When I feel the winners are superb and wholeheartedly deserving, I am glad to be anywhere on the periphery of their sphere. When I don’t- oh, you see those kvetchy posts on writers’ blog/tweets/chat-boards. I try not to lament much in public, but I feel it just as much.

So this was one good excursion, and now I’m back.

Almost. Just in case you think this was all fun and games, I’ll share some of the hair-raising dangers you don’t want to run into in the dead of night. Yup, this from the still undisclosed location we were in. 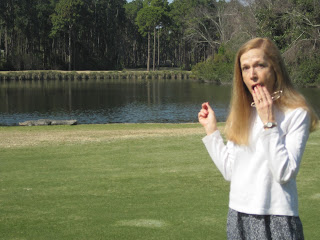 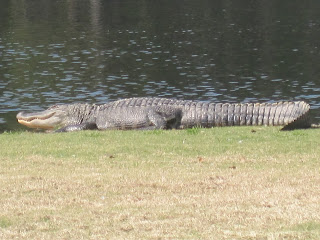 It's an Al eat Al world out there.

Nowhere Near a Computer

After a year and a half of blogging, I made the earth-shattering discovery of how easy it is to have posts scheduled to pop here when (gulp) their writer isn't anywhere near a computer.

So this is where I am- nowhere near a computer. At least until next week. I'm still very much on the job as DD's chaperon for yet another international piano competition. She was picked to be one of twenty semi-finalists, (fingers crossed, everyone) but the location? Can't complain.
I’ll leave you with a hint, gratis of the very talented Canadian artist Shelagh Duffett: 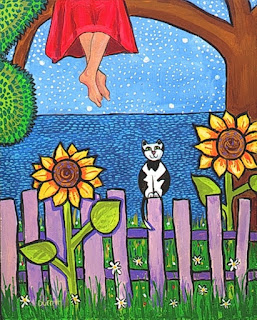