With the Jewish High Holidays around the corner, I thought I'd throw some ponderings to the universe. I'm definitely not a Rabbi, but I play one in my mind while vacuuming or folding the laundry. My late father noted my tendency to be ‘teachy-preachy,’ and so I haven’t changed.


Warning: A sermon, or what we call a DRASHA, follows.

G-d bless anyone who steps in where needed.


There’s a Jewish belief that the world depends on the constant existence of the thirty-six righteous ones- simple unknowns, who do the right thing where others don’t. There may be more than thirty-six, but the number must never be below for then the world as we know it would cease to exist.


Taking this symbolic notion not so literally (the Hassidim actually do) I would say that the fabric of humanity depends on at least a small number of righteous acts.


I have never been one of those uber-righteous. I am more focused on just doing what I consider my narrow responsibilities. I have a friend who has so exceeded hers, I think of her as possibly one of those LAMED-VAVNIKS, =The Thirty-Sixers.


May this day give us the opportunity to do a Mitzvah. And laundry, now folded, doesn’t count.
Posted by Mirka Breen at 10:19 AM 3 comments:

While most night dreams are undigested odds n’ ends of the day, some dreams seem to have a different quality.


I think of these dreams as gifts, though I dare not name the giver.

I’ve had a few amazing dreams that let me resolve, emotionally, some earthly issues. I’ll tell you about the first. It helped me relate to my mother when she was declining. My mother had progressive dementia for seven years before she passed away.


Thirty years before, her mother, my grandmother, had an almost identical decline. When I was in ninth grade my mother flew to Florida to arrange a better nursing home for her mother. When I graduated from high school I came to the United States. After a coast to coast voyage with a friend, I joined my mother who was already in Florida.


I was shocked at the nursing home- it was an all right one, but I’d never been to one before. The state of the residents was heartbreaking. I couldn’t believe G-d could allow people to get to this stage and just linger on for years. I was eighteen, and knew of people who had died of cancer, were killed by war, or died of a heart attack. I knew of the Holocaust. But I had never seen corridors and gardens full of ‘the living dead.’


We visited my grandmother every day for the month we were there, and these visits did not get easier. Although I did not tear up uncontrollably like the first time, my head throbbed and my throat constricted on every visit.
My grandmother did not recognize us, but kept staring at me. “I could look at her all day,” she’d say. The other residents stared at me also. I was the only visitor younger than middle age.


I was haunted by the notion that her body was there, but where was she?

About two years after her death I had one of those gift-dreams. In it, I came to a great mansion, sort of like the gracious white-pillars and wrap-around porches one might have seen in the old south. In a flower filled lobby, kind-faced people told me my grandmother was ‘upstairs.’


Grandma Sarah came down, looking radiant. She was wearing one of those whole-garden-on-my-hat sort of hat. She told me she was fine and happy. She asked that I let my mother know she was in a very good place.


I told my grandmother I had been worrying about this for a long time, and when I saw her last, wondered if she was even aware.


My grandmother said, “I was always in there, I just lost the ability to let you know.”

I woke up from this dream feeling different.


Whenever I see someone whose awareness seems diminished, I remind myself that they are still there.
~~~

Wistful thoughts on this national memorial day. Like Scarlet, I’ll think of something funny tomorrow. Tomorrow is another day.
Posted by Mirka Breen at 4:17 PM 7 comments:

Writers writing about writing and about being a writer

After re-reading the eloquent Take Joy by Jane Yolen, and being reminded by a dear friend that it’s all been definitively said, ages ago,  by the poet Rilke in Letters to a Young Poet, I ask myself: “Hey, Self, does the world need yet another writer ruminating on being one?”

I found me answering, simply, NO. PROBABLY NOT. DON’T KNOW.


What the world needs is above my pay-grade. It’s challenging enough to understand what I need, and what those dear to me need.


And so once again, I resolve to continue and tell my stories. I wish all of you the same. Tell yours, while Ol’ Man River will just keep rolling along.


If happiness is spending your life your own way, I wish you much happiness. 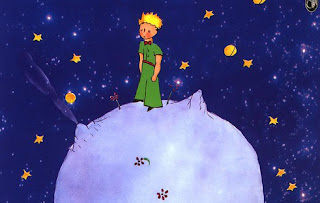 I’ve posted before about the artistic impulse to ‘leave something behind.’ (‘Why?’ August 16 2011) I think of it as creating time capsules.


My father died on November 28th, 2009, in Jerusalem. His wife and life-partner, my step-mother (though she rejects the title) still grieves. Sorting through and making order in the home they had shared for forty-five years, she found a roll of never-developed black and white film.


Nothing on the outside told of the film’s age or content. But a specialist film developer brought it out.


From the many images of my siblings, it seems the photographs are from 1972. Nearly forty years after they were taken, and almost two years after his death, my father is peaking at me from behind a tree. 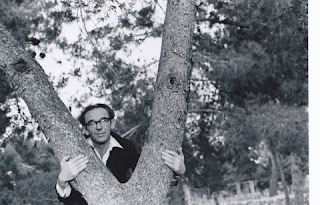 He was a gentle man and a gentleman, who chose to describe himself (tongue-in-cheek) as “an optimist and a guide for the perplexed.” He even had this printed on his name card.


I look at the tree, which forms a V. 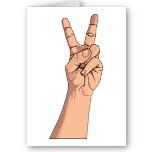 I make the sign back to it with my hand.

Another writer posted on a kid-lit chat board that she no longer cared if she got published. Her post made me reflect on my own journey. I’m either lazy or impressed with my post (possibly both) that I thought I would repeat it here.


When I began submitting, I gave myself an allowance: a number of rejections before I should give it up. (It was a ridiculously low number.)


When that number passed, I gave myself a time-frame by which I must have my first acceptance. (It too was absurdly short, in hindsight.)


Then I decided I must get my ‘break’ before I reach a certain age.


When that came and went, I took stock. I realized that I was happiest writing the first draft to a new story. The rest was justification for spending the time.


That settled it- I will throw in the towel when I no longer have these precious moments of happiness and can not see the point. No more numbers, dates, benchmarks.


That was when the first acceptance sneaked up on me. I’ve had many moments of happiness since, getting acquainted with parts of the process I hadn’t had a chance to before.


But no matter, I know THE WRITING IS THE THING.
Posted by Mirka Breen at 6:27 AM 2 comments: