SOME SANTAS ARE JEWISH

Yes, Virginia, I’ve seen it with my own eyes

When DS was in preschool, one of my mothers’-support group friends related a scandal in her daughter’s pre-school. Like us, my friend’s family is Jewish. Unlike us, who sent our kids to a Jewish pre-school, Christian families were the majority in her daughter’s school.

Shortly after Christmas one of the kids asked her daughter what Santa had given her. The three-year-old gave an answer, which set the stage to a scandalous reaction.

“We’re Jewish,” she said. “We get presents from real people.”

Other parents wanted my friend to teach her daughter that it was not okay to infer that Santa isn’t a real person, and do it ASAP.

The thing is— Santa is real if you dig deeper.

Santa Claus, the giver of presents to bring joy to children on the darkest days of the year, is an idea. As such, it is real. But abstractions are beyond children’s literal thinking and so various individuals dressed in red, and donning floppy red hats with white pompoms, have taken to manifest the spirit of gift-giving on this one particular day.

Some years later, our next-door neighbors, a Norwegian family, asked if their friend could come over to our house on Christmas Eve and dress up in the Santa outfit so he can make the appearance for their twin daughters, then barely a year old. As he’d be coming straight from work, they needed a place for him to get into the outfit. Of course, we said yes. They left his outfit and a sack full of presents for their twins at our house. Our kids, by then teens, found the whole thing rather funny. It hadn’t been part of their childhood.

When the friend showed up, he was so drunk I had to help him wiggle into the outfit and catch him so he wouldn’t fall down while doing so. He needed help at every step. I lit his way to the neighbors’ door, holding my breath so he not collapse on the sidewalk. I breathed a sigh of relief when I saw their door open and their arranged-for Santa waddle inside.

The next year, our neighbors asked if our son, by then in first year of college, would do the favor of being their Santa. “Last year didn’t go too well,” they said. Apparently, they had no other friends who would volunteer.

I asked DS, and he said he’d do it. It would be like a fun acting gig. The day after, our neighbors told me they had never had such a great Santa. Apparently, DS prepared Norwegian sentences to utter in an altered “Ho-Ho-Ho” voice, and his whole act was so hilariously memorable that as far as they were concerned he has the volunteer job for life. This Jewish Santa was the real deal.

And he did indeed materialized the spirit of Santa Claus for the next few years. The year he went to graduate school in Paris, the neighbors were bereft that he would not be there for their yearly tradition. By the time he returned from France, the twins no longer needed this concretization of holiday spirit. Santa now came in their own gift giving and receiving, no red hat and white cotton wool beard needed.

But I can attest at least one Santa was Jewish. I have the picture to prove it. 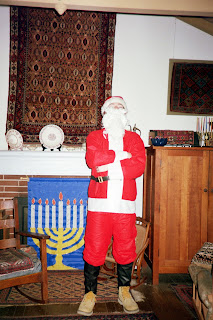 Please, no humbugs, folks. May the joy of gift giving and receiving be with you the whole yearlong.

This is hilarious! But there is a St. Nicholas and he's one of my favorite saints.

That was so sweet of him.

What a fun story! An inebriated Santa must've been hilarious!

What a wonderful story! I love it! Your son was so generous to share his talents to bring joy to others--definitely in the true spirit of gift-giving.