There’s a lot of fear in the air for those who blog, vlog, post, text, email, or write in any way that is considered “published.”

Fear that our words would be flagged as not woke (a.k.a PC) enough.

Fear that years from now our texts will be quoted when we apply for a job.

Fear that if we write about people from our lives, (IRL=in real life) they will be hurt.

Fear that if we write about fictional characters, someone in real life would think it’s them.

Fear that later we’ll cringe at the quality of our old writing.

The common thread is FEAR. 😨

My personal resolution is to write anyway, and tip my virtual hat to the fears. Yup, I know you’re there, but I’m doing it anyway, so there.

My greatest fear is that I won’t have anything worth saying. So as long as I think I do, I’m glad of that.

I don’t think there’s such a thing as living without fear. Fearlessness is the appearance some convey to others. I bet that inside, the fearless are quaking and then do it anyway. 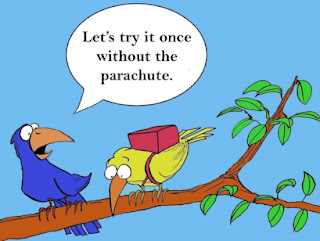 Yeah, fear is a demon. I swallow it and do it anyway. Takes courage. Thanks for encouraging us. But those birds! lol

I think you have to write and have thick skin. You can't please everyone, and there will always be critics.

So funny about the bird with the parachute!

Since mostly I write puzzles, I don't have quite the fear factor that other writers have, but I guess we all have to decide how much we'll let fear control our lives. Good topic, Mirka.

Fear controlled me for a month recently. I didn't blog because I got a very strong negative reaction to a post I wrote; however, the reaction was not intelligent or reasonable. It was hard for me to get past it, though. I'm happy to be blogging again.

Fear will always be there. We have to continue anyway.