I have a fear of unfinished projects.

It could have started with a rather ambitious project that, in hindsight, turned into a traumatic event. I was four years old when my mother discovered that all of her feminine napkins disappeared. Two packages, which she discovered an hour later in tatters, cut into various shapes.

“I am making an airplane,” I explained. It made sense to me. The feminine napkins had one side colored a lovely pink, which I thought made perfect, lovely, fluffy seats.

“You are making what? With what?” she said. Actually, she screamed.

I never made that airplane. My mother’s yelling knocked the air out from beneath my wings.

Many other creative bursts that went nowhere followed. At the age of twelve, filled with nascent romantic notions, a friend who lived about a five minute walk away wound up staying until midnight as we feverishly “made a book” using pop song lyrics and magazine cutouts for each page. It was so much fun she forgot to call her parents and let them know where she was. We vowed to continue our book the next day, and she again forgot to tell me that her parents grounded her when she appeared at the door so many hours after they alarmed everyone they knew including the police. That book of romantic song lyrics was never finished.

I had creative bursts that left feverishly begun and then abandoned projects throughout my teens and twenties. I was twenty-eight before I figured how to work.

For me, it entailed a solemn vow to not begin something until I finished the last thing.

When writing, “finishing” is never final and done. But to me it means the first draft is written, then a second draft, and then at least one beta reader gave feedback and I revised again. That makes three drafts. After that, a story may sit in the digital drawer or go on to many drafts and revisions. But every manuscript, short or long, will include a typed last line, THE END.

This deal I made with myself has saved me from starting what I couldn’t or wouldn’t finish, and from hundreds of begun-but-orphaned roads to nowhere. 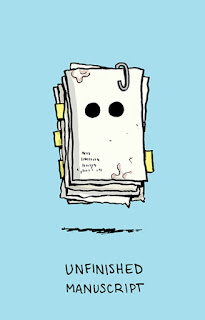 ©Doogie Horner
Posted by Mirka Breen at 6:00 AM

Oh my! Airplanes and pink seats :) My poor mother had many gasps over my creative efforts. She drew the line at writing on walls but I had many hours of play outside where I built things for my little people and animals.

It's interesting that you think of the end before you begin. I have so many unfinished projects or projects that took a long time...because sometimes you just don't know where you're going with them. But I love finishing a piece, whether a poem or article or story. What satisfaction!

I actually just found an unfinished manuscript that I reworked into something else. I try not to ever leave something unfinished forever, but I do enjoy the process of going back to something I had to put aside for a while and finishing it up.

What fun stories from your growing up! I don't feel strongly about the necessity to finish a project. Some projects reach a point where it's just not worth the effort (imo), but I admire your determination.

Mirka,
I am laughing and crying as I read this.
But so proud of you for being a finisher! Your wonderful manuscripts prove it.
Trine

Awesome airplane story - you can't make that stuff up! The best fiction comes out of the truth sometimes. And I usually have several unfinished manuscripts on file (along with dozens of finished ones, mostly PBs), but getting to THE END, even for a first draft, is super satisfying.

The airplane story is hilarious!

I'm a plotter not a pantster because of too many creative dead ends, full of sound and fury and signifying nothing.

I'm disappointed that you didn't get to complete the airplane. I'm unhappy with myself when I don't finish something, so I tell myself I never intended to finish certain projects.

I like how you type THE END, even though we all know there really is no such thing. I have such a hard time decided I am done with a story. I guess that is the perfectionist in me, but also the fear of sending something out "too soon," which everyone talks about as the worst thing possible. But even that can be a learning experience, right?

I too find it helps having an end in mind. That end may not work out, but at least I know where I'm headed.