Here's a bit of writerly contemplation to remind us that the world isn't ending. Whatever is ahead, good storytelling was-is-and-will-be forever a cementing part of the human race. Dickens himself lived through a few scourges.
~~~

However you feel about Charles Dickens stories, few will disagree that he was the master of first lines. Every one of these first lines can be seen as prescient. That's what great lines are.

“Whether I shall turn out to be the hero of my own life, or whether that station will be held by anybody else, these pages must show.”
David Copperfield

“Now, what I want is, Facts.”
Hard Times


Some are as short as it gets:


And some are preposterously long:

But what Dickens taught storytellers is that first lines, like first impressions, matter. A lot. 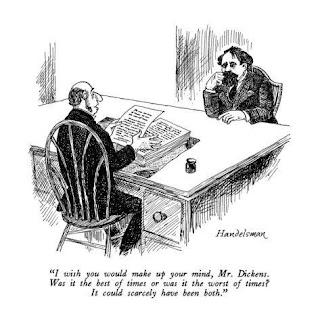 It's amazing how different an author's first lines can be!

One of my favorite writers! Such great first lines!!!

I love Dicken's first lines. David Copperfield is my favorite. I find first lines the hardest thing to write. There's a lot of pressure to get it right. It's not as common to find great ending lines. But those make those stories unforgettable.

As part of my English degree, I took a course on Dickens. We read everything but David Copperfield, but I do own that book as well. I remember my entire class wanted to burn Bleak House when we finished reading it. That is a LONG book. LOL

Dickens' lines about the worst and best of times reminds me of the Chinese curse: May you live in interesting times. However, when I tried to locate the source of it, I found that, unlike Dickens' words, there's really no such phrase in Chinese literature. Rather, two tales in a collection of Chinese short stories (1627)included the following lines: Truly, better be a dog in days of peace/Than a human in times of war! Recently, I heard someone in a radio interview call the CoronaVirus a war. I thought it an over-the-top declaration, but every person has a right to her/his opinion. I'm hoping that these "interesting" times we're going through actually lead to a positive reset of values and actions.

The first chapter of Great Expectations is oft-considered the greatest first chapter of any novel. I learned that in The History of the British Novel, a 300 level class. I enjoyed that class so much. I could be happy just going to college for the rest of my life.

Putting it right here, since you mentioned it, Janie:

" My father’s family name being Pirrip, and my Christian name Philip, my infant tongue could make of both names nothing longer or more explicit than Pip. So I called myself Pip, and came to be called Pip."

We all spend probably far too much time on those first lines, but they do matter. I love the first line of John Irving's A PRAYER FOR OWEN MEANY (love the whole book, in fact):
“I am doomed to remember a boy with a wrecked voice – not because of his voice, or because he was the smallest person I ever knew, or even because he was the instrument of my mother's death, but because he is the reason I believe in God; I am a Christian because of Owen Meany.” Talk about reeling in a reader!

loved this! the timelessness of Dickens is what authors hope to achieve

and prescient! what a great word! beautiful!

also wanted to say thanks for visiting my Beast World campaign.

These really are great first lines. But what's interesting to me is how different each one is, depending on the story that follows. Nice share. I hope you and your loved ones are all safe and well. Take care.