“A DATE THAT SHALL LIVE IN INFAMY”

If the title doesn’t ring a bell, listen to this speech—

“Yesterday, December 7, 1941— a date which will live in infamy— the United States of America was suddenly and deliberately attacked by the naval and air forces of the Empire of Japan.”

The attack on the U.S. navy in Pearl Harbor, which led the sleeping eagle to wake up and enter a world war that would reshape our place in the century to come, was the September 11th of the twentieth century. Those who live in the 21st century commemorate the September date, but December 7th changed the American destiny in arguably more profound ways.

So today, a date that might have lived in infamy and served to remind us of the nature of the world we are making, is but a whiff of a distant memory that few think about when the digital calendar/phone says it had arrived. 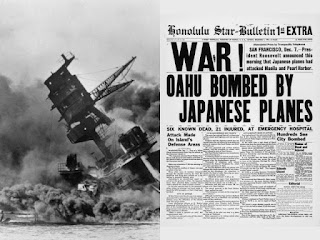 I was just reading about that event in my morning devotional. I had not realized that 1,177 crewmen lost their lives. Such a sad and monumental event. May we all work toward having more "Peace on Earth!"

Indeed. We cannot forget. I read a really inspiring piece about the chaplains who served that community: https://www.ncregister.com/features/pearl-harbor-at-80-how-courageous-chaplains-saved-lives

How interesting that you brought this up today. I have been thinking a lot about two major game-changers in the 21st century: 9/11 and COVID. There's no going back to whatever someone considered "normal" after these two major events. You're right--the game-changer of the 20th century was Japan's bombing of Pearl Harbor and entering WW II. What would the world look like today had that not happened?

It's so sad that we have these dates we'll always remember for awful reasons. But the one thing that helps me is thinking about how our country can and does put our differences aside and come together in times like this. I'll never forget the amazing way we came together after 9/11. I always say the USA I love is the one that emerged on 9/12 that year. That's the world I want to live in. The one where people can still come together despite differences and say, "We're in this together."