I have this orchid plant that I’ve given up for dead too many times to count.

It was given to me too long ago to remember who the giver was. Back then, it had a long elegant  stem with two large leaves at the bottom and a cluster of three open blossoms on top. It reminded me of a giraffe, my favorite animal.

I don’t have a green thumb. If fact, you would not be insulting me if you called my thumb grayish black. I expected my new friend to last about as long as the rest of the plants formerly in my care and now in in great garden in the sky.

True to my prediction, the orchid died. Its blossoms shriveled and its leaves got yellow and then brown. I was ready to add it to my weekly garbage pickup at the curb on pick up day, but for some reason  I kept forgetting to do it.

For another reason I will never fully understand, I kept giving this dead plant a weekly watering. It was a sort of, “as long as you’re here, might as well...”

It surprised me. New leaves replaced the old ones, and new blossoms appeared, like hands clawing up from a grave.

Another person gave me a second orchid. It, too, joined the first in the cycles of death and re-birth.

The last year has been hard, and despite all the TLC and the happy talk I gave, both orchid plants had finally given up. I was sad, but nothing lives forever.

And then, this happened: 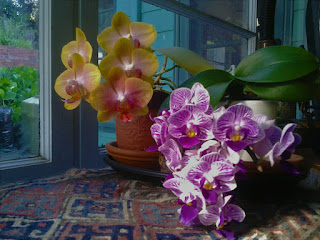 I think of it like the muse, whose death is an illusion.

Oh wow! So beautiful! I find plants fascinating and a bit mysterious. How they seem to look dead and when you've forgotten all about them, they surprise you. Good analogy with the muse. Thank you for this lovely post.

Very pretty! I don't have a green thumb either. My mother can revive dead plants, but I kill everything. The only exception is a plant my neighbor gave me for Mother's Day. It's still going. This is a record for me by far, and I have no idea why this plant is still hanging on despite my lack of green thumb.

I used to have a really difficult time with orchids. For whatever reason, they would flower only once and that was that. So I gave up getting new ones. A few years ago, some old friends visited and came with an orchid plant for me, not knowing my orchid history. Okay, well, thank you. It's been a dream come true: the plant keeps putting out thick glossy green leaves and new flowers. I repotted once and I might have to go to bigger pot soon. I am so grateful to finally have a thriving orchid and to witness its beauty unfolding again and again.

MirkaK, seems what our ever-reviving orchids have in common is that they were gifts from others, doesn't it? In the grand cosmic scheme this might just be relevant ;)

Your story reminds me of an old blog post of mine about an orchid we gave as a birthday present in 1990 to a friend who knew nothing about orchids. She asked experts for advice and learned a lot. The orchid is still alive, joined by several siblings.

OMG, Barbara. I just read your fifteen-year-old post and it confirmed that in some mysterious way we are twins :o

Barb and MirkaK, I loved your orchid stories too. I've never had one. I have the ability to kill even a cactus. Perhaps I will get one for my husband with the green thumb.

Wow! That's amazing. Glad you didn't throw it out!

What gorgeous blossoms! Yes, orchids are amazing. I, too, have a brown thumb although my mom could grow almost anything. I have an orchid that mysteriously keeps blooming. It desperately needs to be re-potted, but I'm afraid that if I do, I'll kill it.

Oooh, I love this post. Especially your comment about the Muse. (And, sadly, BTW, I did something wrong to your comment when I thought I was authorizing it, and it went to worlds unknown, but I appreciated it!)

As for your orchid, or orchids: apparently that is the way orchids are. They die down, blossoms fall off, you feel you killed them, and then they come back. I know this because I looked it up online when my orchid seemed to die. I, on the other hand, seem to have really killed it by neglect, since the flowers have not made their comeback. And yet . . . the leaves still look glossy, so who know?