It’s the (unofficial) beginning of fall.

It’s the whisper of the beginning of a new Jewish year.

And in Israel where I grew up, it is the absolute first day of a new school year.

That made August thirty-first a singularly wistful day.

Invariably we had to do something special on this last day of summer. Spending the day kicking sand on the beach, going for an ice-cream sundae the size of a mountain, or frantically beginning that art project we meant to do in summer but never did, only to leave it half-done once again.

It was as if we were parting with something we’d never experience again.

When you could count your years on earth on both hands, the prospect of next summer was as distant as the moon. You could see it, but experienced it as something unreachable.

This added melancholy and longing only August the thirty-first possessed. The closest thing to a heartbreak without a defined cause.

So Goodbye August. We never had a choice but to part, so we might as well pretend we do, and welcome September. 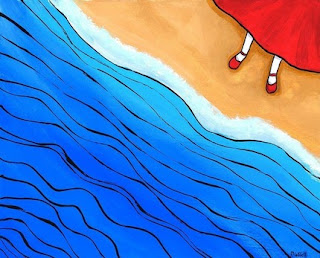 Sweet memories! Thanks for sharing.

Mirka, we're on the same wistful wavelength. Was just pondering this on my morning walk. I love the lazy days of summer but it feels good to return to the work in Sept.

Summer ended here (unofficially) on August 29th. That was Ayla's last day home. Now she's in school for about twelve hours a day thanks to sports. I feel like I lost my daughter when school started. It's been tough, and I'm only on day two. I guess this is another adjustment to get used to.

It's hard to believe August is already over. This year has gone fast!

I, too, was thinking that, with September upon us, another year has flown by. Where did it go? We used to rip off pages from a calendar on the wall, but who does that now? So there isn't even the physical act of letting go of each month anymore.

Ah, well. I'm one of those dinosaurs who still has a wall calendar and so I do flip the page. It's a Jewish calendar with beautiful art images for each month, which makes it a fun experience as it changes the "décor" to a new ever-beautiful image:)

Although September is the beginning of "meteorological autumn," my husband claims it's still summer until September 21. His birthday occurs in the first three weeks, so he's entitled to chose his season. :-)

I hope this message can get through, because I'm on Safari, and I also enjoy your posts so much. Anyway, what a sweet tribute to August and past resonances. September for us will mark the beginning of the first fall in Portugal for us.

I'm testing to see if this gets through (given that I'm on Safari). A comment on an earlier post did, so we will see. I enjoyed "looking back" resonance of this post. It's that time of year. I always love the "shift" I feel in the environment at this season.