Mayday— or a Day in May

My first post for this May, and the phrase “Mayday! Mayday!” rushed in.

So I followed it to its supposed origins, which I found interesting. Origins in common lingo often shine a light on historical events, and Mayday didn’t disappoint:

The Mayday call originated in the 1920s. A senior radio officer at Croydon Airport in London, Frederick Stanley Mockford, was the first to use this signal to indicate emergency situations. Mockford’s superior officers asked him to think of a word that would indicate distress and all pilots and ground staff would clearly understand during an emergency. As much of the traffic at London’s airport at that time was to and from Paris, Mockford proposed the expression “Mayday," derived from the French word “m’aider" that means “help me" and is a shortened form of “venez m’aider," which means “come and help me." 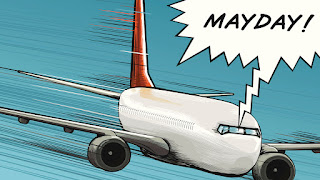 Which lead to the question of what distress signal preceding it, SOS, stood for.

Also interesting, and spiritual to boot:

SOS, short for “save our souls" sent by Morse code, predates the use of Mayday. In 1927, the International Radiotelegraph Convention adopted Mayday as the radiotelephone distress call in place of SOS.

Here’s wishing SOS-free and no Mayday this May. Have a great one 👍💗

May got off to a rocky start for me with lots of little things going wrong. It's release day, though, so I'm trying to focus on the positives.

Interesting information about the origins of SOS! I wondered what it stood for.

Good trivia to know! So far May has been good. Happy upcoming Mother's Day, Mirka!

Interesting to learn about the origins of Mayday. Thank you.

As for SOS, I was a licensed ham radio operator when I was middle school/high school age and we were told the SOS was used because of the simplicity of the signal--3 dits, 3 dashes, 3 dits. Easy to send, easy to remember. I would bet the 'Save our souls' connection came after the signal was already chosen, but I could be wrong.

Some day one of us will be on Jeopardy! and will have to deal with SOS or Mayday. Suddenly, we'll remember this post and will be declared champions, thanks to you! Or maybe you'll be the champion.