{This word was added to the dictionary in September 2018. Kryptonite referred to a mineral from the planet Krypton that had an extremely harmful effect on Superman.}

Well, no Superperson, me. But to each humble mortal a Kryptonite must needs be.

Mine is rather odd, as it is not a thing but a lack of a thing. The thing I must not lack if I am to be producing original writing (or thought, craft item, or a genuine smile) is caffeine. Put it another way: I need my coffee or black tea, and you may report me to the authorities as a bonafide addict. But while you snitch on me, I should add that it is my only addiction, if that makes a difference.

It gladdens my heart to read studies that confirm caffeine consumers live (on average) longer. It staves off Alzheimer’s and increases IQ by a statistically significant measure. Not such a terrible dependency as such goes.

I also stick to two-three cups a day, always before four in the afternoon. Well, almost always. If I have to drive later or stay awake, I break the before-four rule. Thus, I do my best not to have to drive later and also excuse myself from activities that ask me to be perky after dinner. If you’ve ever asked me to come to a lecture at such late hour, now you know why I said ‘no.’ On the other hand, if you asked me to meet you for coffee in the morning hours, now you know why I almost always said ‘yes.’

Confessions time over. I have to get back to my coffee now. 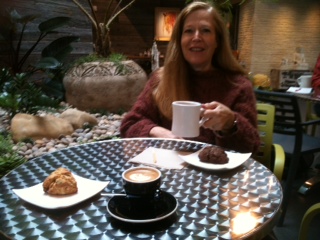 Coffee has many benefits--they help with migraines too. I'll have half a cup with cream and plenty of sugar and an aspirin to take the edge off the pain. The days of "having to drive" kids to sports, etc. are done; it's more likely for them to drive me someplace :) Oh, I read an interesting thing that even smelling coffee gives many benefits as drinking it. Coffee is too bitter for me but I love to smell it while it's being ground.

I need three things for my writing: a notebook, a fast-flowing pen, and tea.

I don't like coffee, but I love my Diet Pepsi.

I am seeking healthy caffeine b/c of my health issues. So I'm drinking lots of green tea! (I don't like coffee.)

Green tea is GRRRREAT. A gift to humanity <3

We used to tease my mom about being addicted to coffee. To prove to us that she wasn't, for a week after Christmas she'd stop drinking it cold turkey. We'd find her sitting at her morning devotionals with a cup of hot water instead. The family joke was that Mom didn't start drinking coffee until she and Dad had 3 churches and 4 children; since I was the number 4 child, I obviously drove my mother to drink. ;)

Evelyn, your essential goodness would drive any of us to despair, as we can't possibly come close to it <3

No way can I be a caffeine addict. Gave up coffee decades ago because it triggered migraines, though I still love the aroma. You can drink for me!

I gave up coffee for about three years because I thought it was making me tense. During those three years I did not write ONE SINGLE WORD. I don't think this was a coincidence.

I've sometimes needed a coffee before my morning coffee, in order not to make a stupid mistake with the coffee maker...

Barbara, I totally get you ;)

I need my caffeinated tea in the morning, but being a not great sleeper, I try to stick to decaf in the afternoon.