My wall calendar tells me today is Australia Day.

To Australians, it marks the anniversary of the 1788 arrival of the First Fleet of British ships at Port Jackson, which is the beginning of the country of Australia we know now.

To me, it’s a reminder of a classic. Judith Viorst’s Alexander and the Terrible, Horrible, No Good, Very Bad Day.

First published in 1972, it’s still a best seller and an iconic text. Alexander, an American kid, is having such a bad day that he thinks moving to Australia will solve his predicament. It’s logical, in the way kid logic works. Australia is far away. Australia is upside down, in the southern hemisphere. Australia is shrouded in otherness and it’s “not here.”

Many adults never outgrow this sort of thinking. When “here” is hard, “elsewhere” will be better.

At the end of his terrible no good day, his mother assures Alexander that tomorrow is another day and, besides, there are bad days “even in Australia.” 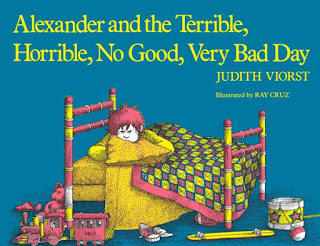 I’ve never been to Australia, but my Aussie friends and acquaintances gave me the impression Australia is culturally rather similar to the United States, especially when compared many other parts of the world.*

Viorst’s choice here is poignant, because there is no running away from challenging times. There’s only moving forward, for tomorrow is another day.

*(Incidentally, in the Australian and New Zealand version of this book, Alexander wants to move to Timbuktu, which I find less successful. He could have wished to move to the United States for a similar effect. )

This kind of Australia Day I can celebrate, and do every day. The assurance that tomorrow—  everything is possible.

That's one of my favorite books, Mirka. Some days just really aren't the best kind of day. But tomorrow...yeah, things have the possibility of being better. (And with God's help, even the bad days can give us opportunities for growth and change.)

I used to read that book to my class. It's delightful. And she does capture the reality you mention, that somethings just have to be gotten through, and can be.

Perhaps I need to reread this because I’m the type of person who always lives in the moment. That might sound good, but it can also be a curse.

I've heard the title but never read the book. But I have sometimes had a similar thought: when I'm having a terrible day I want to move to...New Zealand, which is about as far away as I can get. Well, there is Antarctica, but there's a notorious lack of coffee shops and bookstores there.

Mirka, some of the best books are kids' books and this is definitely one of them. Yes, there are days that are just so awful you don't know how you'll get through and miraculously it passes...the sun shines again and all is well.

We never know what a new day might bring.

As a child, I always saw the grass as geeener somewhere else, not in my family. It was only when so much was coming out about what happened in other families—no one spilled intimate secrets in those early days—that I realized how fortunate I was, even though things were never great or especially joyful at home.

For two Jewish gals like us, MirkaK, forgive my use of a Christian metaphor: we all have a cross to bear. Even in Australia.