Storytelling is for Always

When I was one year old, my mother and I flew from Israel to the United States because her father, my grandfather whom I never met, had just died. My father stayed behind, and our stay in Florida, which was supposed to be short, lasted nine months.
It would be a foreshadowing of my parents eventual divorce, when I was seven. But for a time, it was an extended separation.

When we left, I spoke in two-word sentences in Hebrew. When we returned, I spoke fluently, and in English, a language my father barely knew. But my father understood the very first thing I said to him when he greeted us at the port of Haifa, where our ship had docked. He told me about this meeting many times. He said I looked at him, took his hand and said, “Daddy, tell me a story.”

I forgot whatever English I knew not long after. I would learn it (or re-learn) some years later in school, as a second language. But I knew this sentence because in re-telling my father always said it in English. 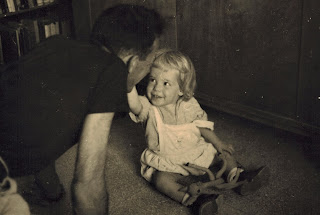 Tell me a story. No matter what or where, no matter how or whom. There are always the stories and the storytellers who tell them.

Mirka, this is truly one of my favorites of all your blog posts. I love that that was your first sentence when you saw your dad again. Clearly, your story telling talents are well deserved.

Mirka, this story and picture are soooo adorable. Yes, we need stories, good ones, always. I'm sad that your parents divorced. Strange how a girl from Israel has much in common with a girl from India. I, too, forgot Hindi the one year we were in the US when I was 6 yrs old and had to relearn it when I went back.

That is so sweet. And now you are a storyteller.

What kid doesn't like to hear a story? That's an adorable picture!

It makes my heart cry. Loved your parents and love you most!

What a charming family story. (Speaking of stories.) I think it's so delightful that you had that expectation. Had you thought of him as a storyteller when you left for America?

As a one or two-year old, I have no memory of any of this, Elizabeth. I think kids think of their parents as "parent," whatever that means. This story was told to me years later.

What a beautiful story. And I love the picture you shared. You were a writer from a very young age!