When I first drafted my picture book, (THERE’S A TURKEY AT THE DOOR) I was determined this turkey was not going to speak English. While she was relatable, this was not the sort of story where an animal says, “How are you today” and “Where's my kibble.” I had had my fill of anthropomorphic animal stories after reading hundreds of them to my kids. This turkey was going to remain, well, a turkey.

I posted a question on a kid-lit writers board asking for suggestions as to how to spell the sound of a wild turkey. I got the ever-helpful links to actual wild turkey sounds. Before posting the question, I had already listened to such and couldn’t figure how to make the sounds in English spelling, so it was not very helpful. One writer only said, “This is the oddest question ever posted on this board.” That didn’t help, either.

I was stuck. I had the story, and I had the character. But my character needed to speak Turkey. (Not Turkish 😊)

A few months later, I visited the zoo with my kids. In the petting zoo section, a large turkey hen kept following me around. She talked the whole time and wouldn’t leave my side. I saw it as a sign to get back to my story. But I still couldn't spell words out of her calls.

A tall woman in zoo worker uniform smiled at me. “Ya-ya-hoo has taken to you,” she said.
“Ya-ya-what?” I said.
“That’s her name,” the petting-zoo keeper said. “Kind of the sound she makes.”
I listened.
If you stretched and twisted your ear, it was an almost-sort-of-not-quite the sound my new turkey pal was making.
I mean, not really. But when we returned home, (without her) my fictional turkey had her sound. 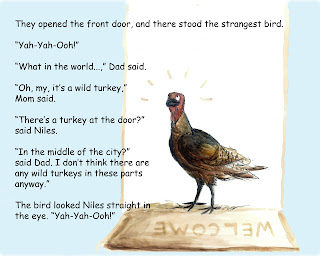 I have another friend who wrote a book about animals and their sounds. She spent hours listening to recordings of the animals and finally came up with ways to spell out the sounds they made, and it definitely wasn't woof or meow!

Nice. I struggle with onomatopoeia, too - in particular I had to come up with something for bagpipes once - think I went with scree scraw or something like that.

That's a fun way to think about animal sounds. When the boys were little, they would all mimic the actual sound a dog makes instead of saying bark, bark or woof, woof.

It can be tough matching sounds to words. I love how you found yours!

For a second I thought that was a strange choice but then I said it and it does sound like a turkey.

Mirka, wild turkeys visit our backyard sometimes and I've not been able to capture the sound in words. It's hard making it look right on the page, but you did it!

I loved hearing the background of how you came up with the turkey's speech. You came across the right person at the right time. Your book sounds amazing!

Jenni, Mirka's book is, indeed, wonderful! And it was perfect for my son and his family who are vegans. Mirka, I loved hearing about your trip to the zoo and how you found the sound for your turkey character. Thanks for sharin.

Ev, Ya-Ya-Hoo (or as the book's editor preferred, Yah-Yah-Ooh) to you! XO