Ruminations on Winter in California

The dead of winter where I live, is the time the gates of heaven open and water comes down every few days to bring life and green the land. There is nothing dead about winter here.

Only a few hours’ drive, the deepest snow in the United States can strand travelers even today, just as it did the Donner Party over a hundred and seventy years ago. You can certainly think of that swatch of California as being in the dead of winter. The story of the Breen and Donner families is taught in fourth grade of every California school. DH was told he’s descended from the same Breens, and so we’ve earned the right to reside over those lethal hills and past the freezer zone, on the beautiful always spring-like coast.

I don’t write this to make you jealous. ‘All y’all,’ seized by cabin fever and thinking just about now that you’ve had enough winter, take heart and some hot chocolate. Sunny is not all it seems.

“A sunny place for some shady people.” This saying by a clever writer, made me think how vivid writing works. It’s about delineating. It’s about marking contradictions, pointing differences, making a line that pops.

California is all about lines. It’s a land of extreme if adjacent climates. A state that shines in exploration even as it cultivates a shady subculture of folks running away from this that and the other, including norms of decency held onto by older cultures in older states. It’s a tantalizing contradiction from which great human dramas are born, told, written, filmed,  and like all life— eventually evaporate.

Reminding the creative self to cherish these lines, and raising a glass of soymilk to the sunshine. 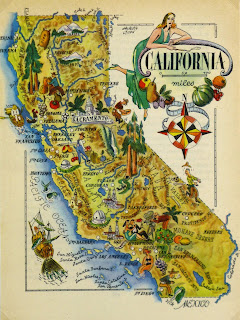 Wow! Mirka! Your husband's connection to this land is deep. Your writing is so lovely, reflecting the land you live on. And no, I've never thought of winter as dead because I'm so conscious of the life beneath the surface, even in people.

I am just "above" you in slightly colder Oregon, but I feel a kinship with California, because my dad was raised there, and I still have so many family and friends residing in that state of contradictions. I will never forget visiting San Diego one winter and people were pulled over by the side of the road to watch the rain. We do that for snow in Oregon. :)
Happy almost spring!

Since my husband was raised in CA and went to school there, I've visited it quite a few times. It's a fascinating, diverse state. Most of my memories are good ones, but there are a few I'd like to forget. :)

I almost left my heart in San Francisco once. I left a heart-shaped glass pendant in a San Simeon hotel about 1986. I contacted the hotel and they mailed it back to me.

I wish I were there now, or San Diego, or anywhere sunny and warm but not too hot.

Your connection to the historical Breen reminded me of humorous MG novel. Have you read THE SECRET OF FERRELL SAVAGE by Jennifer Duddy Gill (who used to hang out on the Blueboards)?