When my kids were smaller, I ran Camp Mama every summer. Summers became the time I did not write any first drafts. Their school vacation was my on-the-job-times-two. 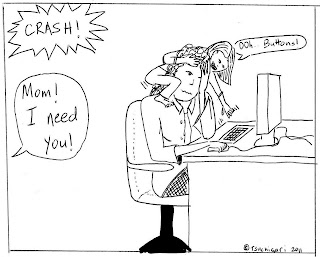 DD *just* graduated from HS, and I am adjusting to the fact that I won't "need" to have a summer break. The thing is, as they got older and I did not need to chase after them, I could have written in summer. But my writing-rhythm got used to the revving-up the engine in August, getting going in September, being productive until late May, unwinding in June, and re-charging the batteries in July.
Someone said, “If it works, don’t fix it.”
I think I’ll keep my summer break. At least this one, my last before I move on to the next stage of my life. Get ready for some empty-nester posts. 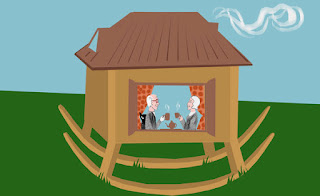 I heard a talk by author Marilyn Sachs and she did the same thing--kept to the summer/school vacations time off from writing. Worked well for her.

Kids aren't the only ones who need time off to recharge. :)

I'm still trying to get into a schedule for the summer. So far not so good.

I can't write in the summer either, Mirka. Even though I've had an empty nest for some time the cycle is ingrained in me.

See, conversely, as a teacher, and someone without kids, summer used to be when I wrote the most. I think this is my first summer where I'm not yet working my butt off. Not sure if I'm going to enjoy this easy feeling, or get bored!

In the meantime, enjoy your summer break!

The 'oooh, buttons!' stage is where mine is at now. He just turned off my laptop last night for me- I was not pleased, lol!

Lovely post. Camp Mama is still in full swing, or will be, at least, if school ever gets out. Feels like that last day will never get here, and we are all ready for some summer fun. I always, however, for my sanity, keep a little writing notebook with me so I can play with words while the kids are at the pool or practice. And I sometimes get up extra early so I can squeeze in a little writing time. I'd miss it too much, otherwise! Here's to summer and kids (and a little writing too!)

Oh, I didn't know your daughter graduated! Was this "early"? She seemed younger. Congratulations to her! As my kids are off, my writing is full steam ahead. hehe

The fields need to lay fallow for a good crop to be produced later. Go for the break! I've been an empty nester for 3 weeks while my graduate travels. I am thoroughly enjoying it though I do miss her.

Yup, DD graduated from high school in three years, and she was young for her grade to begin with. She walked early and talked early, too, so you could surmise she's one of those always in a hurry :)

I'm looking forward to my writing break while the kids are off. Okay, technically it won't be a break. I'll still be writing in the mornings. But the afternoons are saved for them.

I'm glad you'll keep up with your summer writing schedule, Mirka, even though the kids have grown up. We need that break to make our muses happy.

There's something about those lazy, magical days of summer. If we need a time to rest and refuel, I think summer is a great time to cut back.

Good for you! Rest is soooo important. You can't be creative when you are worn out and exhausted.

Mirka, I am in full "Camp Mama" mode these days, enjoying each (fleeting) moment. Congratulations on your daughter's graduation. She sounds brilliant!