STORIES TO DIE FOR

Some years ago, when thought of writing with the intention to publish was still a private one, I got the best advice. This bit of advice sustains me to this day.


It was a cozy morning of light rain falling outside, and tea and cookies inside. I was the mother of a kindergartner and a preschooler, and another mother from my son’s class asked me to her home for tea. I thought it was a getting acquainted sort of invitation. It turned out to be more than that.


The other mother showed me her work space, a corner oak table with a computer, and printed manuscript pages scatted about. She was writing a novel. She had asked me over not to talk about our sons or their school. She asked me to her home because she was hoping to pick my brain.


Really? With what I thought I had put out, I couldn’t imagine what pickings were there. But a comment I had made about a biblical character had sparked her fire, and now it was smoldering, just like the logs in her fireplace. I am so immersed in Old Testament stories it had not occurred to me that whatever I said reverberated. I didn’t even remember the comment. Now her fire was dying down and she had invited me to re-ignite it. 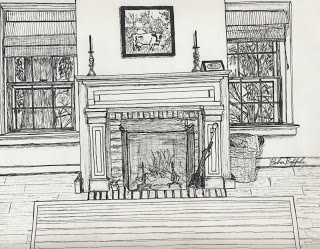 © Baba Buffalo
I no longer remember what her novel was about, only that the biblical character of Rachel bore some resemblance to her main character. But the whole setting sent me into a place I had neglected.
Except for my husband, on our very first real date, I never told anyone I intended to write for children. The chance of ever being published seemed remote, and it was better to keep such an endeavor private. But for some reason I told this mother, who I barely knew, about my secret hope and ambition.
“I have a few stories I would like to tell before I die,” I said.
She asked if I’ve been writing, and I said, “Not yet.”
“Maybe,” she said, “just maybe, if you don’t think of it as something to finish before you die, you might start and then even finish one.”
It was one of those sacred moments. Someone I barely knew had given me the key to unlock the door.
I have lost touch with this writer long ago. I heard she was agented and that her novel had sold. I looked for it periodically under her name, but never found it.
Wherever you are, KC, I owe you this chapter in my life.
Posted by Mirka Breen at 6:15 AM

I am very grateful to KC for getting giving you the right push. I had a similar moment after my son moved into a group home. I told a dear friend "Now I can die in peace". My friend said: " No, now you can begin to really live!" and she was right.

Lovely story, Mirka. I hope you find her book and get a chance to tell her she inspired you.

What an inspiring moment for you! It's surprising how it sometimes takes a word from someone else to spark our own ambitions. :)

The give and take of the creative world is a marvel. Just look at how we can inspire each other, even in small moments.

You might not even realize the perfect words you've said to someone :) I hope you find KC's book ...

As for doing things before we die, I sometimes think of the amazing things we'll be doing in heaven, the most perfect music, art, stories!

I hope you find her too! I'd like to hear the rest of the story, like how her book did and what she's doing now.

No, and I did try. Some folks are not as visible as others.
I did write to a mutual friend who then sent her a note. But so far...

Her real gift was already given.

Oh I love that story. Isn't it amazing how a small comment can really spark something? When I was first trying to get published, a good friend of mine told me: "Maybe this isn't the book that's going to get you there." And she was so right. She inspired me to work on new projects, and one of them finally clicked.

fantastic story and even better advice. i'm a mother of a 19 month old, and I kept thinking: I'll wait until I have more time. Except life doesn't slow down. So I committed to treating my goal like it was "real" (which i wouldn't admit to anyone but myself that it was very, very real.) Now that I have a book coming out, people are finding out that I'm a writer and their reactions are always the same: "I didn't know you were a writer." There's so much competition and rejection in this industry, and I couldn't bare the thought of telling them what I wanted (to be published)because them I'd likely have to tell them about my stack of rejection letters. Bless those treasured few we can confide in that stoke our fires from the deepest embers. thank you so much for posting this.

Beautiful story, Mirka. It's so great when writers inspire other writers.

Beautiful, Mirka! I'm glad she invited you over. Maybe some day you'll get the chance to tell her you also have a novel!

Great and touching post, Mirka. We never know when something we say will plant a seed in another. The same holds true in reverse as well. I'm glad you planted this particular seed and that it has grown so well.

What a warm touching post. I love how memories keep us motivated and inspired.

We never know the effect we can have on someone with our simplest words. We need to be careful with them, but we need to share them, too.